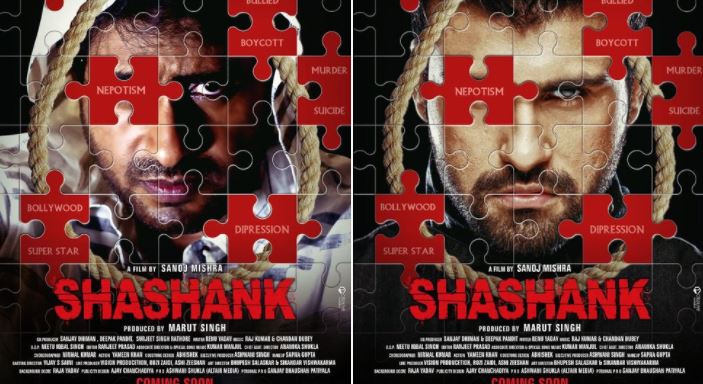 Late actor Sushant Singh Rajput’s sister Shewta Singh Kriti recently took to Twitter to denounce Aarya Babbar’s upcoming film, titled Shashank. Shweta has called for the boycott of the upcoming movie as it seems to be inspired by the late actor’s death.

Film trade analyst Komal Nahta recently shared the posters of the film along with a caption that read, “Teaser Poster of ‘Shashank’, based on a young star’s mysterious death and nepotism in Bollywood. Under the banner of Roar Productions. Producer Marut Singh. Directer Sanoj Mishra. Film stars Arya Babbar, Rajveer Singh. Shooting will be in Patna, Lucknow & Mumbai. PR #AltairMedia ”.

Retweeting the posters of the film, Shweta wrote “Boycott the film and the one who is promoting it!! #BoycottAltairMedia ”

Boycott the film and the one who is promoting it!! #BoycottAltairMedia https://t.co/F5smtiSNY4

The teaser posters show Aarya Babbar and Rajveer Singh front and centre with missing jigsaw pieces around their faces and words such as depression, suicide, murder and nepotism surround them. While the posters strongly hint towards the film being a biopic on Sushant’s mysterious demise, the makers of Shashank have denied such claims and said that Sushant was merely an inspiration for the film.

In an interview with Indian Express, the film’s producer Vijay Shekhar Gupta said, “Sushant Singh Rajput’s death by suicide came as a shock to all of us, but it is not new. Many actors who come the industry to accomplish their dreams of making it big here, end up not getting work. Many take this route, and some keep struggling all their lives.”

“So, we wanted to tell a story of how actors from small towns, who don’t have godfathers in Bollywood, struggle. We will be revealing other characters one by one. I can assure you that this film will definitely unmask the real face of the insiders of Bollywood.”

The film will reportedly start shooting in September in Mumbai and Punjab and is expected to release around Christmas this year. Earlier, another film based on Sushant’s death was announced which was going to be titled Suicide or Murder, and would have starred Sushant’s lookalike Sachin Tiwari as the lead.